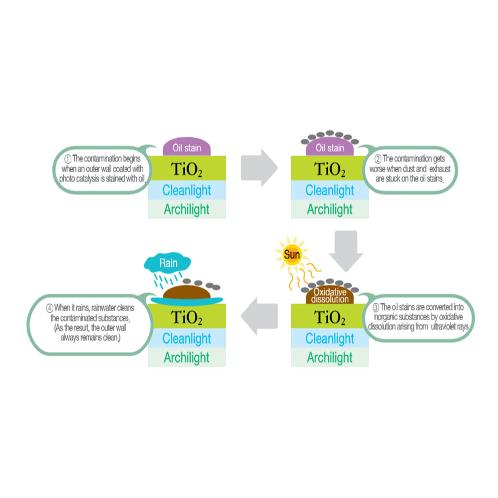 [Features]
A Self-Cleaning Coating(TiO²) has been a product we can only dream about. Dongshin Polychem is now ready to make the dream come true. We solved the problems of air pollution, surface discoloring by ultraviolet rays, and contamination that the existing polycarbonate has. By coating photo catalysis on the surface of polycarbonate sheet, the product has excellent functions of self-cleaning, anti-fouling(fouling resistant), and air cleaning effects that prevent contaminations of dust and exhaust semi-permanently as well as have a self-cleaning ability when it rains.

• Hydrophilic / Self-cleaning
- The coated Archilight/Cleanlight breakdowns organic substances contaminated by sunlight (ultraviolet ray) and rainwater with powerful process of oxidation of photo catalysis (TiO²). As shown in the figures, the dissolved organic substances flows without having water drop and many contaminated substances(dust and air pollution) will be swept away by water. Thus, it is possible to make a perfect self-cleaning with
rainwater or simple shower.
• Anti-fouling
- Since the existing PC installed in outdoor is exposed to pollutions, it has a risk of serious pollutions (dust, distillate, exhaust) as well as severe damages on the surface due to strong sunlight. However, th pollutions(dust, distillate, exhaust) can be dissolved by strong oxidation reaction through our Archilight and Cleanlight with photo catalysis(TiO²) coating. More than 98% of ultraviolet protection always makes PC surface clean.
• Deodorization and air cleaning
- The coated Archilight/Cleanlight dissolves formaldehyde which is a carcinogen, fungus, and ammonia as well as removing odor perfectly. It also removes pollutions by purifying exhaust and volatile organic substances,
• Antibacterial and sterilization
- The coated Archilight/Cleanlight works well to sterilize more than 99% of bacteria and various pathogenic bacteria such as pathogenic escherichia coli, staphylococcus aureus, O-157, etc.
• Decomposition of organic matter
- The coated archilight/cleanlight prevents any defect by eliminating the oil off the surfaces through its oxidative decomposition.
[Application]
•  Prevent contaminations of dust and exhaust semi-permanently as well as have a self-cleaning ability
[Specifications]
• Origin : Republic of Korea
• Size(Capacity) : -
• Function : Self-cleaning, anti-fouling(fouling resistant), and air cleaning effects
• Features : Excellent functions of self-cleaning, anti-fouling(fouling resistant)
• Style : Sheet
• Package Includes : Only

http://en.gobizkorea.com/catalog/about.jsp?blogId=3038134301 Seller_Mail
Introduction
Dongshin Polychem Co.Ltd is the first manufacturer of polycarbonate sheets in Korea and holds an outstanding record of distribution across the nation and puts in our very best efforts in creating new construction culture with the principles of the automation of production, the advancement of product quality, development of scientific installment and intensive aftercare services. Polycarbonate, which is the main material that makes up Archilight and Cleanlight is one of the most highly developed polymers known to our generation and with its outstanding qualities that demonstrate high levels of impact resistance, transparency, lightness and flexibility, it is the brand-new and innovative material that covers all the weak spots of the conventional glass or plastic products used to have. In particular, the excellence that only Polycarbonate can exhibit not only opens endless possibilities to the conventional architectural spaces but also reaches its range out to the electronic and industrial areas. The Archilights, which are the double or triple-layer sheets of polycarbonates solely developed in our company in Korea, have great effectiveness on heat resistance and the strength of the material due to the unique multi-layered format and give out a spectrum of spreading lights which can come in handy when designing a pleasant architectural interior. For these reasons it has been used as a main material of arcades which takes up a main part in the modernization movements on traditional marketplaces, and taking the lead of the industry as an alternative architectural exterior material company. we will never stop trying to put in our best efforts to become the pioneer of the plastic sheet industry by developing new technologies, the manufacturing new products and meeting the standards of perfection while keeping our customer satisfaction as our priority. We will prove ourselves to be an enterprise that grows with our customers. Thank you very much. 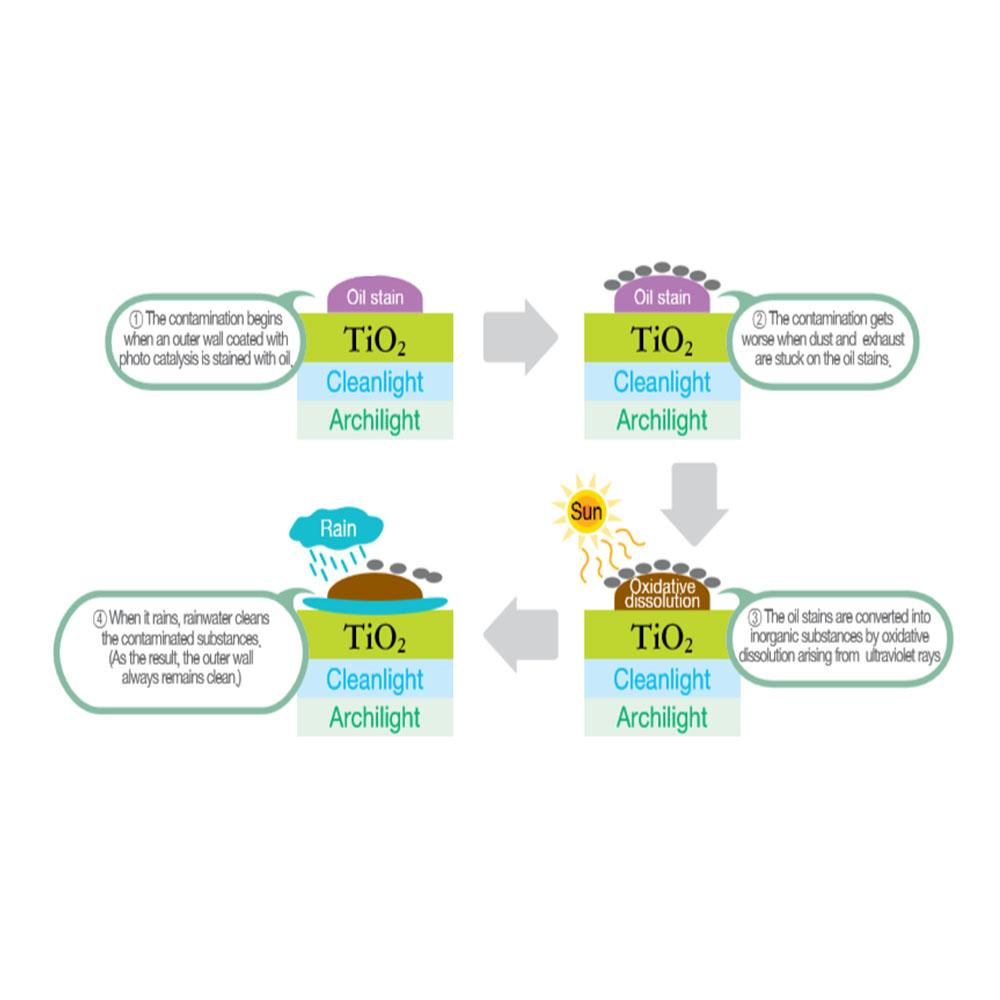