K-LAVA SALT Bamboo Salt ORIGINAL 9 times Baked
K-LAVA SALT—Korea’s No. 1 Bamboo Salt
ORIGINAL 9x
100% Natural Bamboo-baked Sea-salt
K-LAVA SALT is the healthiest salt in the world. Sea salt is contained in bamboo stalks, sealed with the red-soil, and baked on pinewood fire in high temperature.
This process is repeated 8 times, and at the 9th time, the content melts just like lava where the temperature rises up to 1700 Celsius degrees.
Throughout this process, energy from bamboo, pine, red-soil penetrates into the salt. It takes 3 years and 25 days to produce K-LAVA SALT.

K-LAVA SALT is known for its high MINERAL content as well. During repeated baking in bamboo and boiling like lava, any bad residues from sea salt are removed while beneficial mineral content such as potassium, zinc, manganese, iron, phosphorus is maximized.

Salt is essential in staying healthy. K-LAVA SALT is not an ordinary salt. It is a whole different substance because it is alkaline.

K-LAVA SALT is very POPULAR in Korea and Japan. Customers prefer this bamboo salt the most as INSANGA’s market share is greater than all other competitors summed up figure. INSANGA is the head family of bamboo salt that industrialized it for the first time in the world.
SCIENTIFIC STUDIES
There have been numerous studies about bamboo salt’s benefits on stomach, colon, ulcer, antioxidation, blood pressure, electrolyte, teeth, mutation, inflammation, caries, skin, and so on since 1993.
Especially there are three outstanding papers as follows: 1) Bamboo Salt Has Anticancer Activity and Exerts Anti-Metastatic Effects; 2) Bamboo Salt Suppresses Colon Carcinogenesis; 3) Anti-obesity Effects of Bamboo Salt.
OXIDATION REACTION EXPERIMENT
A steel bar was put in different types of salt solution.
They were 1) refined salt, 2) sea salt, 3) once-baked bamboo salt, 4) thrice-baked bamboo salt, 5) nine times-baked bamboo salt. Seven months later, it turned out that the steel bars in different salt solution varied greatly in its oxidation state.
Measured by ORP, their oxidation state was as follows: 1) 118 mV for refined salt, 2) 116 mV for sea salt, 3) 50 mV for once-baked bamboo salt, 4) -56 mV for thrice-baked bamboo salt, 5) -420 mV for nine times-baked bamboo salt. The lower the ORP value (mV) is, the stronger its Redox Potential is.
WHAT K-LAVA MEANS
LAVA is what magma is called when it reaches the surface.
Then why is the ORIGINAL bamboo salt called K-LAVA SALT? To understand this, it is good to know how this salt is produced.
Original bamboo salt undergoes 9 times baking on pinewood fire in bamboo stalks.
At the final baking process, temperature is raised twice as hotter as 1700 degrees C, and the salt pillars completely melt into liquid.
While doing this, any bad residues such as heavy metal from sea salt are removed, and beneficial minerals’ absorption-to-body rate increases.
Bamboo salt products are not all the same quality. Whether they go through this melt-like-lava process or not makes a great difference.
And that is why the original bamboo salt is called K-LAVA SALT.
HOW TO PRODUCE
K-LAVA SALT, Korea's no. 1 bamboo salt is produced in this way:
1) mineral rich sea salt from Korean west coast is stored for three years so that bittern gradually dissipates;
2) mineral-rich bamboo stalks contain the salt inside securely;
3) mineral-rich red soil seals the openings of the bamboo salt pillars;
4) they are put in the iron kiln and baked using pine wood;
5) the above process is repeated eight times, and at the ninth time, the temperature is raised up to 1700 Celsius degrees at which the content turns to just like LAVA; and this is why our salt is called, "K-LAVA SALT".
All ingredients are premium quality and sourced from Korea.
HOW TO EAT
1. You can simply add this salt to your cooking, eating, and drinking routine.
2. It is best to eat this salt with saliva in the mouth just as easily as you eat candy. 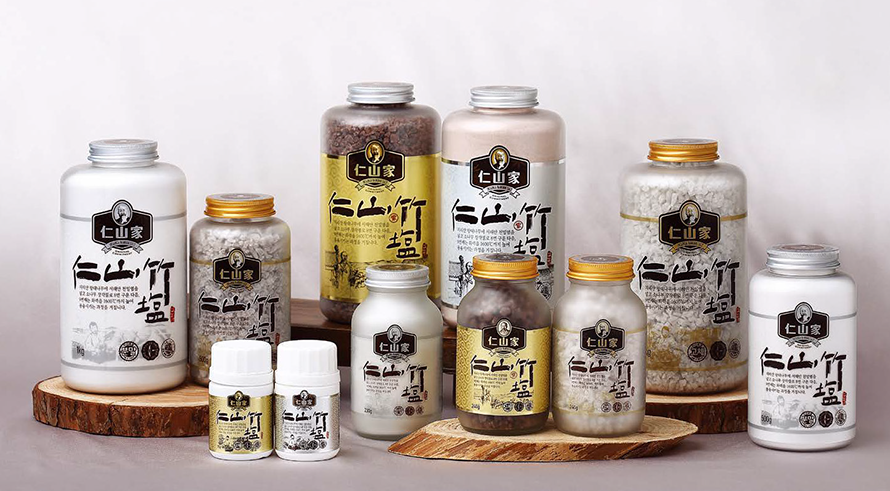 INSANGA Company Overview
Established in 1987, INSANGA (INSAN Inc. – legal name) has been practicing the philosophy of Korea’s famous oriental medical doctor Insan Kim Il-hoon: Save the World by Saving People (活人救世).
Through excellent potential of the indigenous natural ingredients of Korean peninsula, the company is making efforts to help people in the world.
They produce a variety of food which is beneficial for us, using their own developed recipes with great quality ingredients and K-LAVA SALT.

INSANGA HISTORY
2020 - Construction of Antiaging Agro-Industrial Complex Started
2019 - Awarded Consumers’ Grand Prize for Four Consecutive Years
2018 - Floated on KOSDAQ Stock Market of Korea
2017 - Awarded Consumers’ Grand Prize by Korean Consumer Association
2016 - Designated as Food Grand Master for Bamboo Salt Manufacture
2015 - Awarded Grand Prize by Dong-A Ilbo for Best Executive Leadership
2014 - Won the Grand Prize of 'Chosun Ilbo Advertising Awards'
2011 - Acquisition of LOHAS (Lifestyles of Health and Sustainability) Certification
2010 - Opened a Memorial Hall
2008 - Received the Best Quality Product Certification
2001 - Certified HACCP, Hazard Analysis and Critical Control Points
2000 - Certified ISO9001, for Environmental Management System
1995 - Opened the Second Factory
1989 - Started Issuing Monthly Magazine
1987 - Founded the company
VISIT HOME OF BAMBOO SALT
Mt. Sambong (1,187m) in Hamyang, Gyeongsangnam Province is surrounded by mountains in an area untouched by people’s hands.
Looking down from the crest of the mountain, you will experience beautiful scenery featuring the dense Jiri Mountain range, hillsides, and deep valleys.
In the lifestyle exhibition courtyard, there is a statue of Insan. Also, there are an assembly hall, a cafeteria, red soil houses, and several log cabins.
READ MAGAZINE: INSAN MEDICINE
INSANGA has been publishing a monthly magazine since 1989. Every month, 160,000 copies are issued for the members of INSANGA.
The magazine provides useful information about health and life-style. As of May 2020, INSAN MEDICINE marked 280th edition already.
INSANGA was on a German TV Show
Recently, there was a German TV show which covered INSANGA’s bamboo salt story.
Also, a famous American TV channel has shot a video of the healing properties of INSANGA's bamboo salt as well.
Not only being well-known locally in Korea, but also around the world, INSANGA’s bamboo salt is being spread widely.
VALUE OF K-LAVA SALT
First, it DELAYS OXIDATION process. It has the greatest Redox Potential among all kinds of salt.
Second, its MINERAL ABSORBS well. Melted mineral absorbs well into the body.
Third, it PRESERVES the original process. It is produced with HONESTY as per Insan Kim, Il-hoon’s teachings.

www.insanga.co.kr Seller_Mail
Introduction
INSANGA is the company which has industrialized “bamboo salt” for the first time in the world in 1987. Doing Business As: INSANGA Legal Name: INSAN Inc. This company has inherited bamboo salt production directly from Insan Kim Il-hoon, who developed bamboo salt. Korea’s famous oriental medical doctor Insan Kim Il-hoon had a motto: Save the World by Saving People (活人救世). This philosophy is held in high regard by INSANGA. Through excellent potential of the indigenous natural ingredients of Korean peninsula, the company is making efforts to help people in the world. They produce a variety of food which is beneficial for us, using their own developed recipes with great quality ingredients and K-LAVA SALT. 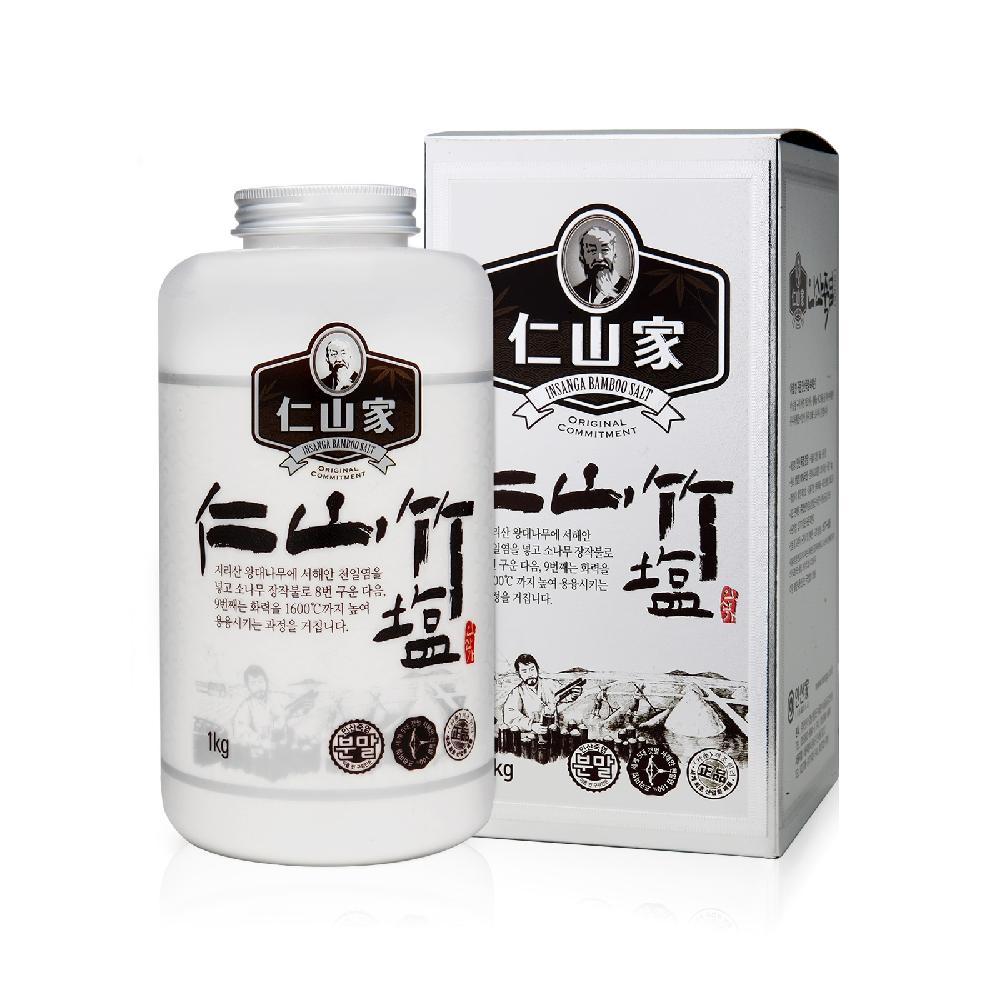 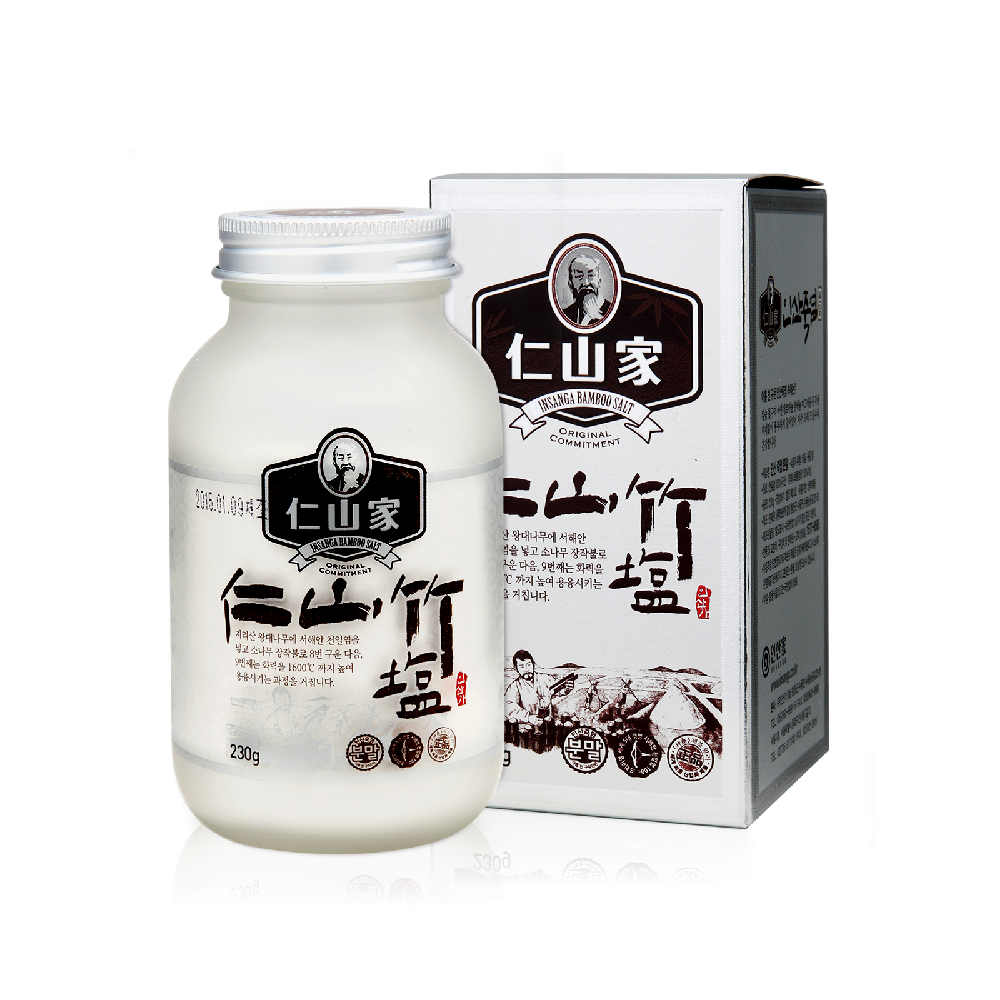 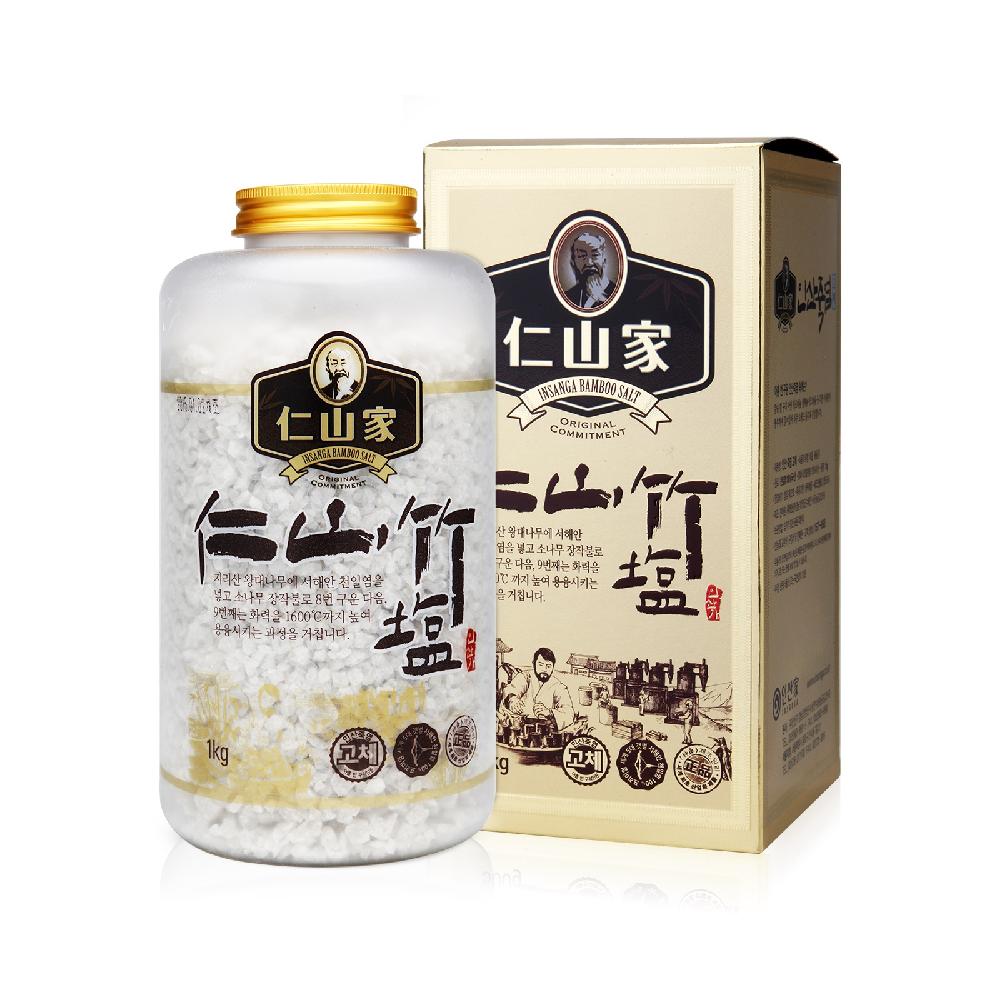 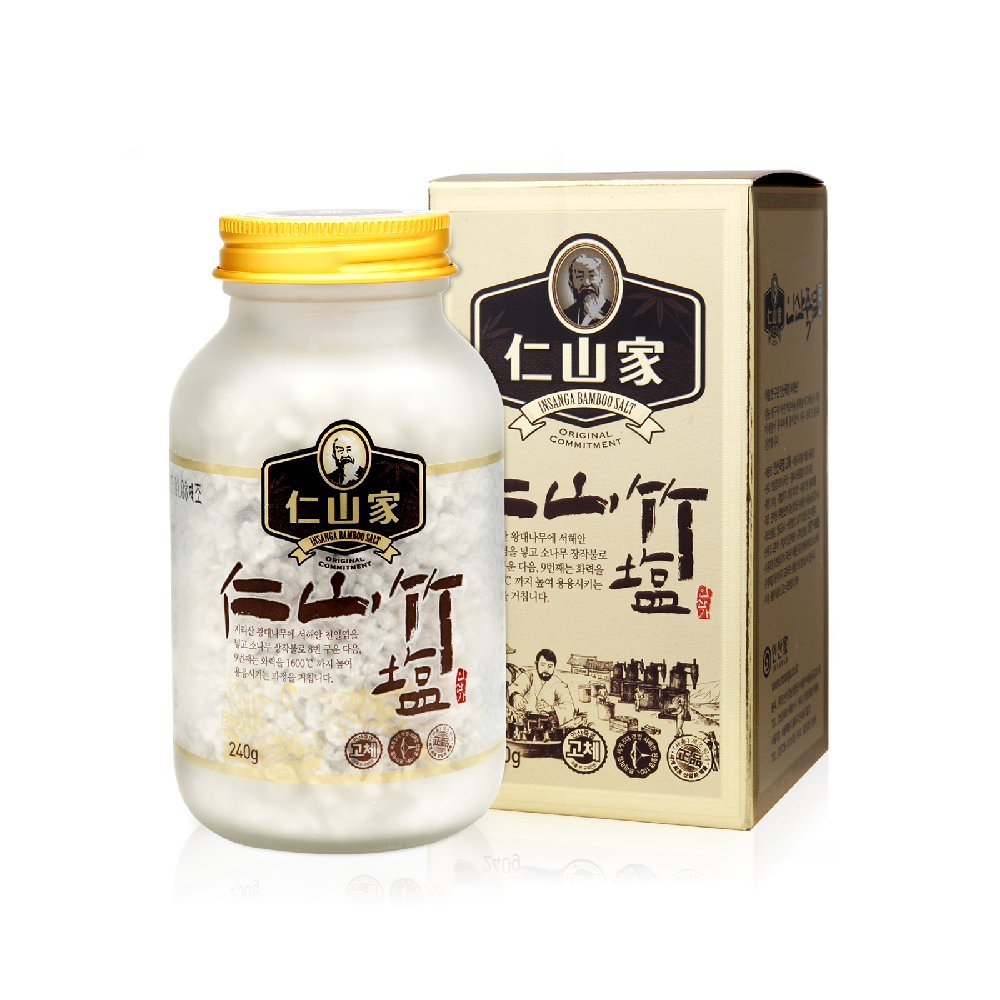